What is known about the breakup of dams in Brazil 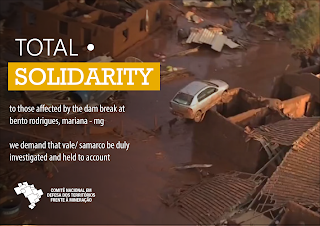 The torrent already moved for more than 500 km (320 miles) and it is going toward the sea. From the 15 cities in the states of Minas Gerais and Espirito Santo warned by Brazilian Geological Survey the torrent, already, passed by 11 cities, and continues to advance, through Doce River.

An avalanche of mud and polluted water submerged homes and vehicles in the district of Bento Rodrigues, at the town of Mariana, in the Brazilian state of Minas Gerais, when two dams.

2) Who owns the dams?
The tailings dams are from Samarco SA, a joint venture between Vale SA (50%) and BHP Billiton Brasil Ltda (50%).

Vale SA is a company widely known for its constant disregard to social and environmental rights, causes numerous impacts to the environment and human rights violations.

3) What is the situation at present?
The District is completely buried under toxic mud, with access possible only by helicopter. There are countless homeless and so far have been counted at least 6 dead, 28 missing. Three of the unaccounted are children, ages 4, 5 and 7. A rescue and salvage operation involving hundreds of people continues the search, with the help of dogs and special equipment, for victims along the flood plain downstream from the dams.

The torrent, carrying water and mud stained with mineral waste from the mine, is now in the main stream of the Doce River (Rio Doce), and reached the neighboring state of Espirito Santo, this Tuesday, November 10. It already moved for more than 500 km and it is going toward the sea. From the 15 cities in the states of Minas Gerais and Espirito Santo warned by Brazilian Geological Survey the torrent already passed by 11 cities.

It is still difficult to list all environmental impacts. However, some impacts are already happening and others already be predicted. 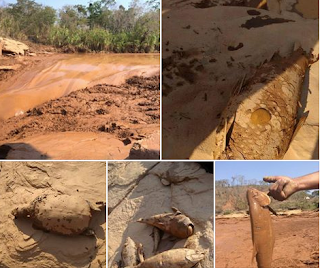 The sea of mud that came out from the breaking of the two iron ore tailing dams devastated the fauna of the river basin.  Environmental damage in the area is immeasurable and according to the State Environmental Police reports to blame the mining company. The dams break caused burial of vegetation and fountains, sediment and siltation of water bodies. Those impacts extend for hundreds of miles.

The damage to the environment surrounding the dam and beyond, roughly speaking, may be chemical or physical. The first concerns the chemical soil disruption, not only by iron, but also by other secondary metals discarded during the mining process. One of the effects is that the chemical residues have excess iron, will alter the pH of the earth.

The physical impact of the disruptions are concerning the amount of sludge that is covering a wide area, burying vegetation covering springs and silting rivers. The residue is poor in organic matter, i.e., does not favor the growth of vegetation. Thus, what occurs is that this sludge will start to dry slowly, creating a dried cover over the soil, hindering the water penetration.

Sediments are being dragged and deposited in the passages where the current is weaker. This undermines the channels of the rivers, which can be silted up, and become shallower or even diverted from their courses. Many   springs are being buried. The impact on water resources also affects the fauna, especially fish and microorganisms that make up the food chain in rivers.

5) Situation of the dams before

The dam structure had reached its ceiling, from which should be deactivated, according to the licensing commitments made by Vale/BHP Samarco in 2008, when the installation license was granted. Vale/BHP Billiton (Samarco) increased its extraction of iron ore production capacity at its plant, in the region, by 9.5 million tons a year in 2014. The increase in production did also grow the volume of waste deposited in the broken dam. Each ton of ore processed generates almost equal volume of waste.

Last year, the production was 25 million tons, 15% more than the previous year. The largest volume of waste was close to 3 million tons in the year, reaching a total of 21.9 million tons of sandy materials and sludge, resulting from iron ore beneficiation. This data is from Samarco’s Annual Sustainability Report 2014, published on the company website. The report makes no mention of increasing the capacity of these reservoirs, or reinforcement of these dams.

A technical report prepared by Instituto Prístino for the Minas Gerais Environment Prosecutors’ Office and published at the Regional Superintendence of Environmental Regularization (SUPRAM) website included a series of warnings about the dam. It recommended, as a condition for renewing Samarco’s license, a contingency plan in case of accidents, “given the presence of the population in the community of Bento Rodrigues.” This report is dated to Oct. 21, 2013.  Eight days later SUPRAM renewed Samarco’s license under various conditions.

a)    Media and government officials do not relate Samarco to Vale and BHP Billiton. Samarco is a joint venture of two mining giants: Vale and BHP (Australian company recognized as the world's largest in the sector).

b)    The security protocols of the emergency plan were not implemented. Vale / BHP Billinton (Samarco) did not alert people in the area that a breach had occurred. Some Bento Rodrigues residents said they learned of the danger only when they saw massive clouds of red dust rising from the dam, about four miles away.

c)    This catastrophe is not an accident or fatality, but a crime. A technical report issued in 2013 warned the risk of a break in the Fundão dam. This document was attached to the Environment Prosecutor's report, at that time, when Vale / BHP Billinton (Samarco) made the application for renewal of license for the dam. The Prosecutor's report indicated that there was a risk of disruption of the dams. "The contact between the pile and tailings dam is not recommended because of the risk of destabilization of the pile mass and enhancement of erosion". However, mass midia, some sectors of the government and the company are trying to pass the idea that the disruptions of these mining tailings dams were an inevitable disaster and should be consider as a natural disaster.

d)    There is a promiscuous relationship between the State Government and the Company. The Search and Rescue operations Center is at the Mining Company Headquarters without public, mining workers or press access. The management of an immense tragedy is being made within the four walls of the mining company. Impossible not to be meddling of the company in government decisions. Only shows that the government is responsible for the deaths and damage from the mining companies. Minas Gerais state Governor gives press conference at the company's headquarters.

e)    Marine life will be also affect. The contamination reached river Doce and will arrive at the sea, threatening marine life at the coast of Espírito Santo state.

f)     It is necessary to rethink the scale, methods and rates of mineral extraction. The activity of large mining has increased in scale and reduced fixed costs. The intensive search for cost savings associated
with the intensification of extraction increases the risk to workers, population and the environment. The companies decide the rates of the extraction of minerals.

g)    The environmental licensing system (authorization process) that is based on self-monitoring and proprietary information produced by the venturers themselves.

We alert and denounce a Project of Law (PL) No 2946/2015 of the governor of Minas Gerais, Fernando Pimentel. This bill, which is being processed on an emergency basis at the Minas Gerais State Legislative Assembly, aims to streamline licensing and reduce the social control over the security of priority projects for the state. The project enhances the advancement of mining and other ventures without proper supervision, leaving the society at the mercy of the high price to be paid by an irresponsible and unsustainable development.

A few comments on tailings dams:

It is essential to condemn the use of tailings dams. It is an anachronistic technology, highly impactful and of great risk to the safety of people, mining workers and communities located downstream of these structures.

For a long time the environmental movement has criticized the form of extraction, which uses large tailings dams and waste dump in addition to the open pit extraction. We can no longer accept such practices, given the existence of alternative technologies.

There are ways to make a dry processing with magnetic separation. Even in the case of conducting a wet treatment with water in the processing, it is possible to make a drain disposal the material.

According to report of the State Environmental Foundation (FEAM), in 2014, the latest available, of the 735 existing dams in Minas Gerais, 42 have no guarantee of stability, Despite the risks, these dams can continue to operate.

According to the survey, 29 of these dams were not possible to guarantee stability and, at 13, were not completed the audit for lack of documents. Vale / BHP Billinton Samarco dams that collapsed in Mariana had received the approval of the auditors -which considered stable.