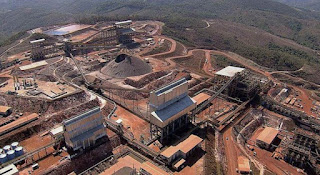 The Federal Prosecutor's Office of the Citizen's Rights (PRDC / MG), an agency of the Federal Public Ministry (MPF), requested the court to cancel the provisional and installation licenses granted by the State of Minas Gerais to Anglo American Iron Mining Brazil for the implementation of Step 3 of the company's iron ore exploration and transportation expansion project in Conceição do Mato Dentro, central region of the state.


According to the PRDC, the licenses were granted in violation of the rights of those affected, especially the right to information, since the licensing process went ahead without presenting information on compliance with the conditions of steps 1 and 2 of the project, and with the complaints from those affected still pendning. These complaints were also registered by the MPF and the Minas Gerais Public Ministry (MPMG) at a public hearing in the district of São José do Jassém and at meetings at Dom Joaquim and Alvorada de Minas.

MPF also points out that five leaders who questioned the venture had to be included in the Program for the Protection of Human Rights Defenders in the face of the threats they suffered after joining a citizen action calling for the suspension of the process and a public hearing.

In addition , two ruptures of the pipeline occurred in under a month in the municipality of Santo Antônio do Grama (MG) which, for the MPF, makes clear the risks resulting from the non-observance of principles of prevention and precaution by the state and the company.

The MPF also requests that any act that may advance the mining activity related to Step 3 cease, until the compliance of the conditions of the previous steps is proven; until the adoption of concrete measures to repair, compensate and mitigate the impacts and damages caused to communities adjacent to the project, which have strong traditional links; and the adoption of safeguard measures to prevent the recurrence of damage to the Rio Doce basin.

The requests were made within the public civil lawsuit proposed in July 2017, in which the MPF requested the suspension of the Step 3 licensing process underway at that time, due to the lack of demonstration of compliance with the right to information, as determined by the Transparency Law.
According to the lawsuit, many doubts remained about what was included in the Environmental Impact Studies (EIA) and the Environmental Impact Report (RIMA) and on the level of compliance with the conditionalities of the previous steps, which were not resolved by the authorities.

The original lawsuit did not go to judgement because of a conflict of jurisdiction between two courts of Belo Horizonte city; the MPF awaits the Federal Regional Court of the 1st Region to resolve the conflict, generated by a problem in the distribution of the Electronic Judicial Process (Pje), which did not allow the handing down of a previous injunction, distributed to the 16th Federal Court.

Licenses - According to the request sent to the Federal Court, after the MPF filed suit, the state agencies simultaneously granted the prior and installation licenses of Step 3, presenting 50 new conditions, even without the company presenting proof of compliance with the conditions related to the previous phases of the mining project. Steps 1 and 2, together, contain over 400 conditioners.

For the Regional Attorney for the Rights of the Citizen, Helder Magno da Silva, the granting of licenses by the state of Minas Gerais is an affront to the objectives of the licensing process, especially those objectives related to the principles of precaution and prevention and the right to information.
"It is surprising that in a project of this magnitude, with the report of numerous cases of human rights violations, and after the rupture of the Fundão Dam, the licensing agencies, especially the state of Minas Gerais, grant environmental licenses without the due, expected and valuable clarification of relevant and essential issues" states Helder Magno.

Public hearing - The annulment of the public hearing held on June 20, 2017 was also requested, because, given the scramble throughout of the public entities in their eagerness to make the licensing of the enterprise feasible ,a debate was not allowed at the hearing; in addition there was no opportunity in the hearing to obtain information and question the amendments presented by Anglo American, which included the existence of a new EIA / RIMA;  there are several topics to be clarified, including in relation to the impacts of the expansion of the project on the Rio Doce Basin.

For MPF, these impacts are the most negative and require clarification for the population resident close to the mine, so that it can mobilize and claim their rights in a clear and safe way.

"These rights have long been violated under the pretence that negative impacts were being mitigated, and Anglo American and the licensing agencies have solemnly disregarded that a proportion of the population living in the rural communities around the mine are directly impacted or affected by mining activities. This situation results in an illegitimate exclusion of people who are affected by mining, who take directly in their lives - and houses - the burden of this activity and are facing a progressive worsening of their living condition, forced displacement and social or moral death is being imposed on them," the request says.
From: Ministério Público Federal em Minas Gerais