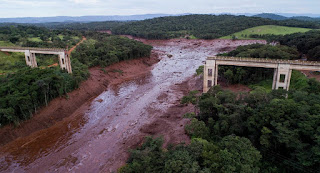 In a public note, bishops and other Catholic entities of Brazil indicated that the process of reparation, in the case of the Mining company Vale crime in Brumadinho, “should not be controlled by the person causing the damage". Organizations demand transparency and the participation of civil society in the process of reparation for the crimes in Brumadinho (MG) in order to guarantee real justice for the communities affected and the environment.

Vale SA is the largest mining company in Brazil and the third-largest company in the global mining sector, it is responsible for the rupture of a mining tailings dam that buried with 13 million cubic meters of toxic mud everything it found along the way: people

The Special Commission on Integral Ecology and Mining of the National Conference of Bishops of Brazil (CNBB), the Working Group on Integral Ecology and Mining of the Eastern Regional II of the CNBB and the Network of Churches of Mining (IyM), filed a document on Friday (13), at the 2nd Instance of the State Treasury of Belo Horizonte (MG), questioning the agreement announced in the partnership between Vale and the government of Minas Gerais, in the case of Vale's crime in Brumadinho.  The statement questions the way in which the process is being handled and demands that agreements seek to "ensure justice for the affected communities and the environment.

For the entities, "the process of reparation should not be controlled by the party causing the damage itself". In the note released, they call for compliance with the requirement of social participation "in the hiring of civil society organizations as Independent Technical Advisors (IATAs) and in the meetings of the managing committee".

"There is no reason to justify the secrecy of the counter-proposal presented by Vale, and is necessary an open and transparent discussion on the terms of the negotiation".

"The signatories, as well as the communities affected and society in general, were surprised by this initiative, which until then was carried out without any procedure of publication, transparency or public consultation". The document points out when it reports lack of reasons "for the lack of transparency in the negotiations of the draft proposal" that aims at repairing the impact of the rupture of the Córrego do Feijão mine dam.

The CNBB demonstration can be understood as a call for state bodies to have transparency in any type of negotiation and to ensure justice for the people affected and the environment.

While the text sent to the 2nd Instance of the State Treasury of Belo Horizonte (MG) calls for transparency in the negotiations, it also criticizes the strategies used by Vale to mask the rights violations committed by the company.  "Although it is essential to guarantee the publication of actions and the use of resources, transparent management is not to be confused with propaganda," the text states, pointing to the vast sums invested by the companies, including the Foundation Renova by Vale, to publish about reality, "often incompatible with the reality of the facts of reparation in the territories affected" [...] "building a narrative of benevolence of those who caused the damage”.

"It is necessary to avoid institutional propaganda and the political imprint on the content conveyed as an action of transparency and information".

The CNBB also calls for the suspension and cancellation of the hearing scheduled for 17 November 2020 and affirms the need for transparent negotiations with a broad debate among those affected. The document contests a series of conduct, such as the non-participation of the affected population, the "parallel management" of the state in the administration of resources, the exclusivity of the State Public Prosecutor's Office in the indications of audits, and other issues, which, as the document points out, disrespect Brazilian legislation and violate the rights of the affected populations.