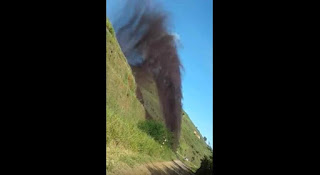 In the municipality Santo Antônio do Grama (population: 4.2 thousand), in the Region of Zona da Mata, on Monday (03/03/2018), the Anglo America pipeline - Project Mines Rio broke and dumped an ore pulp in the spring that supplies the municipality and also the bed of the Santo Antônio River. The Santo Antonio River is part of the Rio Doce Basin, already heavily affected by the Smarco dam’s disaster, in 2015. According to the Doce River Basin Committee, Ribeirão Santo Antônio is 21 kilometers long and is a tributary of the right bank of the Rio Casca and, therefore, a sub-affluent of the Rio Doce River Basin.

Technicians from the Companhia de Saneamento de Minas Gerais - COPASA are on site to do the water analysis and monitor the situation. On the website of COPASA, the information is "due to the disruption of Anglo American pipelines in Santo Antonio do Grama, we suspended the water collection in Santo Antonio River on Monday. The COPASA is providing an alternative for the supply of drinking water to the population."

The Public Prosecutor of Minas Gerais (MPMG) will investigate and sent the Combat Environmental Crimes Nucleus (Nucrim) to investigate the causes and extent of damages, as well as evaluate the appropriate emergency measures. The MPMG also informed that, after the investigation of the facts, it will take all necessary measures for the total reparation of damages caused to the environment and to the population and to the responsibility of the originators of the incident. 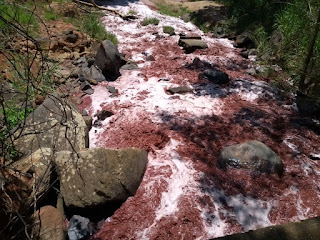 social networks. The information we have is that the breakup occurred around 07:40 in the morning.

According to news information, Anglo American still has no idea neither of the extent nor the cause of the accident, which are still being evaluated. "At this time, our efforts are for emergency measures to ensure water supply in the city," Anglo American's press office said.


Anglo American accumulates a history of negative impacts and neglect

Minas Rio project is an iron ore operation in the state of Minas Gerais and Rio de Janeiro in Brazil. It is operated and owned by Anglo Ferrous, a subsidiary of Anglo American plc.

A pipeline takes ore powder, suspended in water, to Açu Port, on the coast of the state of Rio de Janeiro, Brazil. This pipeline is 525 kilometers long and passes through 32 municipalities, 25 in the state of Minas Gerais and 7 in the state of Rio de Janeiro. Many land properties were expropriated and the construction of this pipeline caused serious damage to both agricultural livelihoods and local ecosystems; pastures were cut in two by a deep fissure where the plumbing was pushed into a mountainous region increasing erosive processes. In turn, port construction also involved expropriation of land and led to beach erosion, flooding and pollution of local agricultural land by seawater.

The intensive use of fresh water to transport ore pumped through the pipeline reduced the availability of this water for other uses, particularly agriculture. Just to transport ore to the port in Rio de Janeiro, the Minas-Rio mine uses enough water to supply 400,000 people a day with basic necessities.

According to the data contained in Anglo American's licensing agreement in Minas Rio, mine operations including the pipeline use 5,023 cubic meters of water per hour and their activity lowers to groundwater and destroys recharge areas and aquifers once which is in the layer of iron ore that water accumulates. At least six communities are living with water shortages due to the drying of springs, in the region of Conceição do Mato Dentro, inm Minas Gerais.