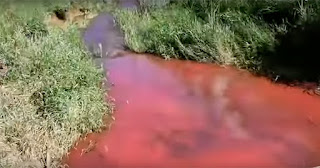 The pipeline is part of the Minas Rio Project, situated in the states of Minas Gerais and Rio de Janeiro in the south-eastern region of Brazil. It is 100% owned by Anglo American through its subsidiary, Iron Ore Brazil. The pipeline starts in the region of extraction, in Conceição do Mato Dentro, in Minas Gerais and extends through 525 km to a port at Açu, in Rio de Janeiro State.

Due to this duct ruptured, environmental institutions were activated to assess environmental damage. The mining activities were paralyzed. Anglo American was already under investigation due to the first disruption of the same duct near the current location. The Court of the Rio Casca district, at the time of the first disruption, determined the blockade of R $ 10 million of the mining company. A conciliation hearing is scheduled for April 20.

The first rupture occurred on March 12, and the heaviest ore pulp materials settled in the Santo Antônio river bed and a thinner layer of pulp in the Rio Casca bed.

While mining companies remain unpunished, disrespecting and trampling safety standards, licensing procedures and not fulfilling conditions, they remain as that sovereign in the territories and will continue irresponsible. Not long ago, Anglo American was got a license to expand its mining operations in the Conceição do Mato Dentro region, at Minas Rio Project. The disruptions and other impacts that are added to those caused by the operations of the same company point to the need to review all the processes of operation of Anglo American.